Vous pouvez avoir ici des bons de réduction pour vous remercier d'être passé voir ce blog.
You can get here some reduction tickets to thank you to have come on this blog.

Wonderful theater of Palais Royal built in 1780.
You have to see it absolutely if you visit the garden of Palais Royal. You have to go at the end on the left and the theater is in Montpensir Street just behind !

The history is on the Palais Royal website, but only in French...if I have time engouh, I will translate it...unless one of my readers can do it...

More information in English :
One of my friend, who is also one of my main readers, Philip (from Atlanta, USA), has sent me a translation for the history of this theater. You can see it just below these pictures. Thank you very much my friend ! 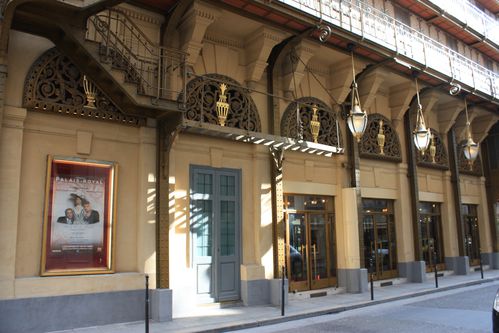 In 1780, Philippe III of Orleans, father of future king Louis-Philippe, undertook to entirely transform his home by creating, inside the interior of the garden, three new streets which would be named as the names of his three sons: Valois, Beaujolais and Montpensier.

With the architect Victor Louis, who had just admirably finished the great theater of Bordeaux, he elaborately laid out plans for these streets to border identical houses, supported by arcades.  Very quickly, came many merchants :  jewelers, hairdressers, tailors, florists, booksellers, perfumers, and also merchants of  "shameless debauchery" (it was a favorite haunt of local prostitutes)… and of course a number of coffee shops (Café de Foy, du Caveau, Corazza, de Beaujolais, Polonais, de Valois, des Variétés) and at the end of Montpensier Street, for the “Petits Comédiens of S.A.S. Monseigneur, the Count of Beaujolais”, the Theater of the Royal Palace, itself, dear public, at your service.

The first stage, inaugurated on October 23, 1784, is built from the plans of Victor Louis. Although it is mostly in length, it could already accommodate eight hundred spectators with  representations of the famous  “Petits Comédiens”.   Sieur Delomel, the first director, is a wood turner and his actors are large puppets which he carves himself with clothes made by a local tailor in the vicinity.

But, make no mistake, there we are very far from Guignol (the traditionnal puppets theater coming from Lyon, the second French town. You can see Guignol in many public garden in France for little children). Here, the puppeteers, while extremely varied, with actors made out of wood, was reserved for adults. This is very sophisticated entertainment already, and is more still when Delomel innovates by introducing children to play the puppets, then, with success thus obtained, makes the puppets strings disappear, so that only the mime-children remain seen with adults on the side to lend their voices.

It is a triumph when Goldoni is made to recall : “we believed initially and one would bet that it was the children themselves which sang ”.

A true troop was born, it is made up of 42 actors and singers, 20 dancers, 20 musicians etc,…in the shadows of the Opera.  A sanction is not long in coming, in 1788, it was forbidden “to employ two actors for the same role whether to sing or speak".

It is the end of the “Small actors of S.A.S. Monseigneur the Count of Beaujolais” and the appearance on stage of a character to which I owe everything, or almost, Miss Montansier.